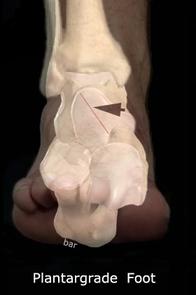 Note – Because the Rothbarts Foot and PreClinical Clubfoot Deformity can functionally look very similar, the only way to determine which of the two structures you actually have, is by running specific computer and video analyses.

The black arrow points to the complete torsional development of the talus resulting in the big toe and adjoining metatarsal naturally resting on the ground. 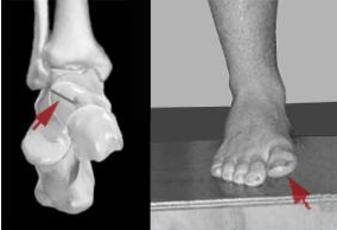 The foot structure you were born with greatly determines your overall health. For example; a plantar grade foot (what you would think of as being a ‘normal’ foot) is linked to having healthy muscles and joints and overall good health.  Whereas 3 other foot structures can cause problems ranging from simple foot pain (Morton’s Foot) to chronic pain and other problems throughout the body (Rothbarts Foot and PreClinical Clubfoot Deformity.

The following is an explanation of the structure, function, appearance, symptoms, prevalence and treatment of these four foot structures:

Note the elevated and inverted position of the first metatarsal, adjoining big toe and calcaneus (See Redarrows) when the foot is placed into its' anatomical neutral position. 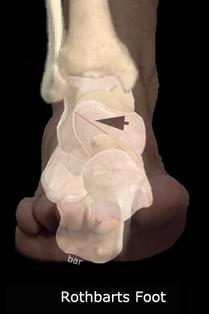 Note – Because the Rothbarts Foot and PreClinical Clubfoot Deformity can visually look very similar, the only way to determine which of the two structures you actually have, is by running specific computer and video analyses.

and the PreClinical Clubfoot Deformity

To learn more about Rothbarts Foot and the PreClinical Clubfoot Deformity, read Abnormal Foot Structures that Cause Chronic Pain

To see the problems that can result when your foot structure is incorrectly treated, go to What Can Happen When You Use the Wrong Insoles​ 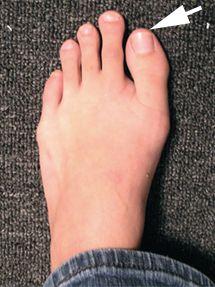 Red arrow (left photo) points to the incomplete torsional development of the talus.

If you have a Morton’s Foot, you will have foot pain. This is because the second metatarsal head (due to its smaller size) is not meant to support the majority of the body's weight. The results can be:

Note - My research concurs with Dudley Morton's findings, in that the Morton’s Foot mainly produces painful symptoms in the feet.  But recently, some internet sites (talking about the Morton's Foot) have cited Janet Travell's earlier work, which suggests that Morton's Foot is a common perpetuator of chronic musculoskeletal pan throughout the body.

However, there are indicators that the PreClinical Clubfoot Deformity is present, such as;