What’s The Difference Between Orthotics And Insoles? 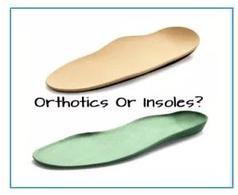 More and more companies are selling over-the-counter insoles and more and more practitioners are prescribing orthotics. Consequently many people are interested in learning about them.

What’s the difference between orthotics and insoles? There’s a lot of information on the internet. If you do a Google search, you’ll find over two million hits on the subject!

Insoles cover a range of products such as a flat shoe lining (included in the manufacturing process of a shoe) or a prefabricated, contoured removable footbed seen in most running shoes and safety boots.

Insoles are used to give an extra cushion in the shoe with the goal of providing more comfort.  All removable insoles are soft and provide little or no support to the arch of the foot.

There are two types of orthotics; prefabricated and custom manufactured.

The prefabricated orthotic is a pre-made device designed to fit the most common foot types, such as a cavus or planus foot. They’re usually purchased at sporting goods stores, without the need of a doctor’s exam.

The custom manufactured orthotic requires an exam given by a healthcare provider. They first take a mold of the foot and then, using this mold, direct a lab in how to manufacture the orthotic; specifying specific wedges, pads and covers they want incorporated into it.

Unlike insoles, orthotics have built-in arch supports that maintain their shape if you press on them. Orthotics are much more rigid than insoles.

Orthotics support the feet and provide some degree of controlling abnormal foot motion in order to prevent it from moving inward or outward. They’re being used to correct problems such as supination, pronation, ankle instability, knee, hip, back and neck pain.

In theory, custom manufactured orthotics are built for a specific patient, in order to get rid of their specific pain problem. But in reality, the question is: How can orthotics, custom made or not, be effective if the doctor is prescribing them without first knowing the cause of the problem?

In other words, if they don’t know the cause of the patient’s knee, hip, back or neck pain, how can they build an effective orthotic that will correct that patient’s specific problem?

What’s The Difference Between Orthotics, Insoles And Proprioceptive Insoles?

Insoles are only generic cushions to provide some comfort and orthotics are being prescribed for all kinds of issues and pain symptoms, without first knowing the cause of the patient’s problem. But proprioceptive insoles are used to eliminate chronic pain caused by one of two common abnormal foot structures; either the Rothbarts Foot or PreClinical Clubfoot Deformity.

Unlike orthotics, proprioceptive insoles do not support the feet, but instead, reprogram the cerebellum (brain) in order to obtain a global postural correction.

On the bottom of your feet are mechanical (touch) receptors. When you stand or walk, these receptors are stimulated and a signal (message) is then sent to your cerebellum. This signal tells your brain where your body is in space – your posture. Your brain automatically makes fine adjustments in your posture to ensure that you remain upright.

If you have a Rothbarts Foot or PreClinical Clubfoot Deformity, a distorted message is sent from your feet to your cerebellum and your brain automatically makes a distorted adjustment in your posture. This bad posture is what ultimately creates your chronic muscle and joint pain. (For more info, read this article on bad posture and chronic pain.)

Proprioceptive insoles are used to make a permanent postural correction in people who have a Rothbarts Foot or PreClinical Clubfoot Deformity. This postural correction allows the body to heal its joints and muscles, hence taking you out of chronic pain.

Proprioceptive insoles are custom designed and fabricated only after running numerous tests and computer analyses on the patient to determine their postural distortions and specific foot structure, as well as the exact parameters which define the insole’s design and fabrication.

There is quite a difference between insoles, orthotics and proprioceptive insoles. Before deciding which may work best to resolve your chronic pain, the first thing you need to find out is the cause of your chronic pain problem.  From there, the decision will be obvious.