How Did Rothbarts Foot Get Its’ Name? 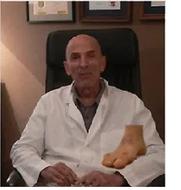 Exactly how did ‘Rothbarts Foot’ get its’ name? If you suffer with chronic muscle and joint pain, you may have searched for information about this inherited, abnormal foot structure, and found it under several different spellings. Sometimes it is referred to as “Rothbart’s Foot,” spelled with an apostrophe. Other times it’s called “Rothbart Foot.”

The correct name, however, is “Rothbarts Foot.”

Scientific and medical discoveries are often named after the researcher that made the discovery. For example, Morton’s Foot, a fairly uncommon foot structure, in which the big toe is more than 2 mm shorter than the second toe, was discovered by Dr. Dudley Morton.

Rothbarts Foot is a fairly common foot structure in which, when the foot is placed in its anatomical position (its’ correct position), the big toe is elevated and inverted relative to the second toe. Rothbarts Foot was discovered by me, Professor /Dr. Brian A. Rothbart.

I originally termed this foot structure, ‘Primus Metatarsus Supinatus,’ and published numerous papers (using that name) describing it and the chronic pain symptoms it causes.

In 2000, it was suggested that my discovery be called “Rothbarts Foot,” and it has since been referred to as this in professional journals.

No matter how you spell it, the Rothbarts Foot, as well as my second discovery, the Preclinical Clubfoot Deformity, are frequently overlooked sources of incapacitating muscle and joint pain.

What To Do If You Have A Rothbarts Foot

If you’ve been suffering from chronic pain and no therapy – traditional or holistic – has given you permanent relief, it’s possible that the actual source of your pain has not yet been found.

Because about 80% of the world population has either a Rothbarts Foot or Preclinical Clubfoot Deformity, the chances of you having been born with one of these foot structures is pretty high.

I encourage you to read my FREE reports which will give you information on both Rothbarts Foot and Preclinical Clubfoot Deformity, as well as information on Rothbart Proprioceptive Therapy, the therapy I developed to permanently greatly reduce or completely eliminate chronic muscle and joint pain coming from these two foot structures.

No matter how you spell it, if Rothbarts Foot is destroying your life, you need to know that an effective therapy is available.